This is not my first trip to White Fence Farm. I'm kind of an addict, but we don't get to go very often since it's one heck of a drive south for us (about 45 minutes). When we do go, it's very much worth the trek!

The first thing you'll notice is that it's on a larger plot of land. After parking (or maybe even during), you may notice that the building is fairly large... well, like Whovians say about the TARDIS, "it's bigger on the inside". There's a big rooster by the front entrance - so you'll know where to go. 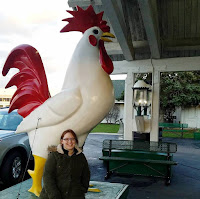 Me and the rooster...

When you go through the doors, you'll notice a large room to your left and a check-in desk to your right. The room to the left has a couple of miniature museum rooms (which are pretty cool) - it also has a bunch of old machines in it - most of which work (there is an occasional one down). My favorite is the old crane machine. The person at the check-in desk will direct you to the middle room, which used to be overflowing with people waiting to get into any spot in any room (and all the many large rooms were open and busy). I find I usually end up getting placed into the "frontier" room, which is one of my favorites. At this point, you'll really start to notice what I meant by "bigger on the inside" - this place is huge!

After sitting down, they'll give you a menu... but if you're like me, you won't need it! "The chicken meal, dark meat." The relishes consist of coleslaw (I usually don' like vinegar-based coleslaw, but this one is pretty good), pickled beets, cottage cheese, kidney bean salad (oh yes yum) and last, but definitely not least (the winner of the lot!) - CORN FRITTERS! Fresh fried and rolled in powdered sugar, these babies are soft but ever-so-slightly crispy on the outside - making these puppies one of the reasons we go! You can also order these by the dozen during carryout or at the end of your meal. 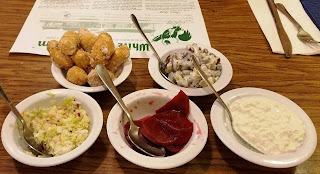 It's perfectly cool to start filling up on relishes! The sides are unlimited - and the chicken is really good reheated at home. DEFINITELY try the chicken at the table when it first comes out, though - so delicious. 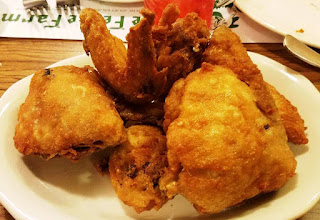 Fresh, never frozen chickens arrive daily to be coated with our closely guarded secret recipe for breading, milled exclusively for us in Chicago. The chicken is pressure cooked thoroughly before being flash fried for only 3 minutes. Delivered immediately to your table, always hot, golden, crispy, and delicious.

Sounds about right to me! The coating is thinner than most chicken joints, but the flavor is much better (and yes I like other chicken joints).

-Moni
Posted by Unknown at 8:48 AM No comments:

Today's recipe is brought to you by an Italian restaurant from my childhood - Avanti's.
Every time my family would drive through Peoria, we would always stop by Avanti's and get their delicious bread (if not the entire dinner). 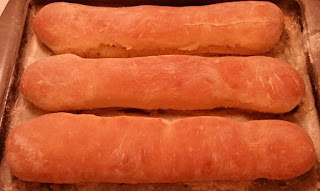 ~*Makes 3 Loaves*~
What kind of bread is it?
It's basically a French-inspired soft white. It's soft and dense, slightly sweet - and is made a similar fashion as a french loaf.

1) Sprinkle yeast onto warm water in the mixing bowl.
2) Add the rest of the ingredients and knead the dough until it is all combined and stretchy.
3) Grease a bowl with butter.
4) Form the dough into a ball and place it into the bowl. Roll the dough ball over so the bottom (now greasy) is on the top.
5) Cover the dough with a thin towel and place in a warm area. (I turned my oven on low and put the dough on the range so there was a low-heat source below it.) Let the dough rise like this for 1 hour 30 minutes or until about double in size.
6) Punch the dough down, fold it together and roll it over again. Let the dough rise (again) for about a half hour or 45 minutes.
7) Cut the tough into 3 parts. Let the dough rest for 10 minutes after this process before rolling it out (this helps the dough basically re-cooperate since you "knocked the wind out of it").
8) On a floured surface, flatten the pieces and roll them out until they are about 16" long (side to side) and about 6" to 8" wide (front to back).
9) Slightly moisten the dough so it will stick to itself better. Roll the dough up, starting from the center and working to each end (from the center). Make sure to roll tightly so as not to incorporate a giant bubble into the loaf. Pinch the seams of the roll and tuck the end. Pinch the ends. Slightly moisten the seams then pick up the loaf and drop it seam-side-down into a bit of flour on the surface (you will be using flour versus the normal cornmeal used when making french bread). Lay the loaf on the pan in the middle and straighten it out.
10) Repeat steps 8 and 9 with the other 2 parts of dough. Place them next to the middle loaf on the pan. Cover and let rise for about 1 hour.

*While the loaves proof/rise in the warm area, pre-heat the oven to 350 degrees Fahrenheit.*

11) Gently rub some flour on the tops of the loaves and place into the oven. Bake for 20 minutes or until the tops are a beautiful golden-brown and are hollow-sounding when tapped.
12) After letting the bread cool, brush off the extra flour with a pastry brush. Turn the loaves over and take a sharp knife and scrape the extra flour off the bottom of the loaf. Brush off any excess flour as needed. Some will hang around in the creases - this is perfectly normal and makes it look even tastier.
13) Slice and serve with butter(optional; I prefer it on its own) or make something with it! One popular thing to do with it: make a torpedo (that's a type of sammich made with Salami, Ham, Lettuce, Mayo, Mustard and American Cheese). 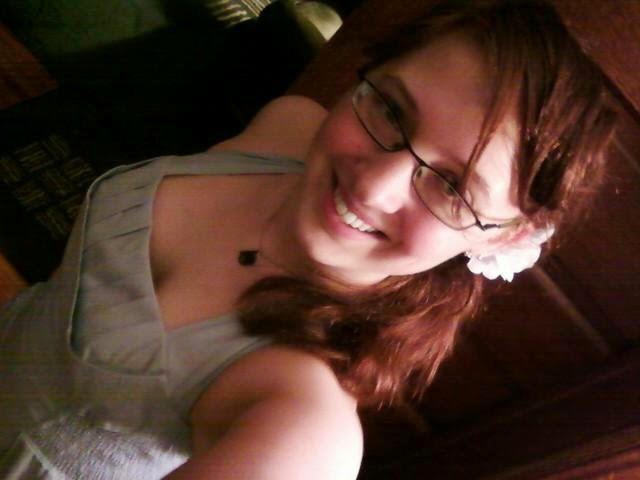 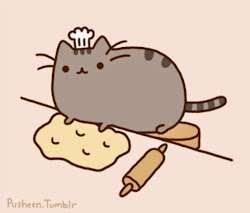 I can only assume this is what I look like when I am working in the kitchen! Hehe. <3